Audititions took place in Danceworks Studios in Balderton Street, London, UK on March 4, 1994. 600 applicants were split into groups of 10 and dance a routine to Stay by Eternal. Afterwards, they each had to perform a solo, singing a song to the backing cassette they each brought along.

The girls chose the following songs to sing: Melanie Chisholm sang I'm So Excited by the Pointer Sisters, Melanie Brown sang The Greatest Love of All by Whitney Houston, Victoria Adams sang Mein Herr by Liza Minnelli and Michelle Stephenson sang Don't Be a Stranger by Dina Carroll.

Geri Halliwell had seen the ad but missed the first auditions as she was visiting her grandmother in Spain.

Lianne Morgan couldn't attend but she sent a demo tape and pictures to the management.

All the girls went home, and waited a few weeks for a response.

Melanie B singing The Greatest Love of All 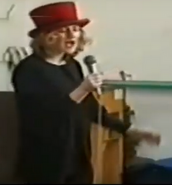 The Audition took place in Nomis Studios on Sanctuary Road, W14 in mid-April. The Girls were whittled to 12 girls after the first set of auditions from the 600 applicants that applied. The chosen ones were Victoria Adams, Melanie Brown, Melanie Chisholm,  Melanie Laccohee, Lianne Morgan, Suzanne Tinker, Michelle Stephenson, Justine Berry, Geri Halliwell, Victoria Unthank and several others.

Melanie C and Suzanne Tinker were unable to attend the second audition. Melanie C had problems with her tonsils and Suzanne due to a bomb scare rendering all London tubes to come to a halt. Fortunately Melanie C's mother called in to explain the situation and was told in response that she would get another chance if they weren't able to find the one they were looking for.

After two months, Geri saw the ad for the auditions so decided to call in to see if she had a chance. The management allowed her to come in to the last twelve.

After all had arrived, and they had done a solo interview, in which Geri also sang I Wanna Be A Nightclub Queen. As she looked older than the other girls, she was asked her age to which she replies:

Her charm won over the judging panel and cementing her position in the auditions.

After the interviews, they all were split into three groups of four girls and had to create a dance routine to Just A Step From Heaven by Eternal. One group consisting of Victoria, Melanie B, Michelle and Lianne. Second group consisted of Geri, Melanie Laccohee, Victoria Unthank who choreographed the routine plus a fourth girl. The first group were joined by Geri in which she was taught their dance.

Later on, they all sang solo songs which Melanie B sang Queen Of The Night.

After the auditions, when all the girls were taking a break and having cups of tea, the five girls consisting of Victoria, Melanie B, Michelle, Lianne and Geri were told that they were chosen as being part of the band.

A week after the finishings of the second auditions, the girls were to come in for a recall making them feel unsure of how many girls they wanted in the group, in Nomis Studios yet again. Unfortunately, Lianne Morgan received a letter telling her that she looked a bit older than the rest, so she was replaced with Melanie Chisholm.

Then the girls had to learn the words of Signed, Sealed, Delivered by Stevie Wonder, alone then in a group, After, they were finally told that they all made it into the band.

The first actual rehearsals started on the Sunday of the same week of the last auditions at Trinity Studios, while staying a week in a guest house in Surrey. A week later, they performed a showcase for the Bob and Chris Herbert's Financier Chic Murphy. They were dressed in black and white clothing, while dancing in unison and singing a prepared song Take Me Away.

Then they spent spring and summer rehearsing at Boyne Hill Road, Maidenhead. Melanie Brown and Melanie Chisholm shared a room, Michelle and Victoria shared a room and Geri had a small room for herself. They continued to rehearse at Trinity Studios with three songs: We're Gonna Make It Happen, Take Me Away and I Want You, I Need You.

"We were the ones who were always rejects but really got on together well. It just took off from there." - Victoria

During a two-week break in summer, Michelle left as it seemed that she didn't fit in and due also to personal commitments. Replacements were to be found, which Touch's vocal coach Pepi Lemer had two girls in mind that he remembered training from the auditions. Abigail Kis was called in first and sang a soul song to the management, which ended in her being selected two days later. Nevertheless, she decided that she would opt out of the band due to personal commitments and she was too young as well.

In July, then they called in Emma Bunton after, and she arrives for a week's trial. She was not only received with a warm welcome from the Herberts, she bonded straight away with the girls too:

"Straight away I knew she was the one." - Geri

"It was quite funny coming into the band late because the others had all known each other for a bit. I had to meet them at a train station the first time and there were quite a few girls hanging around. But as soon as I saw them I knew who they were. We just clicked straight away." - Emma

I got a bit homesick, so I went and had a cry on Geri’s shoulder. That linked us and it's been the same with all the other girls.
- Emma on first time being away from family

Together, the girls continued to rehearse and wrote their first song together, It's Just One Of Those Days (another song that never came to be released).

They persuaded the management to have another showcase at Trinity Studios with baby doll dresses, to which they agreed, so after a few months time they were to perform at Nomis Studios in early-November. At which they changed their name from Touch to Spice Girls. They received a great reception from the music industry insiders.

"We set up a showcase at Nomis Studios using money put up by our parents.About 20 publishers came along and we waited to see who could give us the deal which would suit us." - Emma

During Christmas holidays of 1994, they Geri and Melanie B decided that they would not sign the contracts offered by the management, and even getting advice from others including Victoria's father, Tony Adams.

In late-January 1995, the management handed them contracts, but they decided not to sign them due to the directions the management was taking them in. They then went to find other producers to see if they could sign to them. They then signed up with Simon Fuller's management 19 Management.

Community content is available under CC-BY-SA unless otherwise noted.
Advertisement